Posted on March 30, 2012 by babyboomersmusings

Booked an apartment for our Paris visit on the internet, but will it actually be there?

We had arranged with Vicky by email to meet her on our arrival to pay for the apartment and get the key. The driver of the Shuttle bus called her from his cell phone informing her of our arrival.

He let us off in front of the building at 8 Rue Delambre . Al had a smoke while we waited. 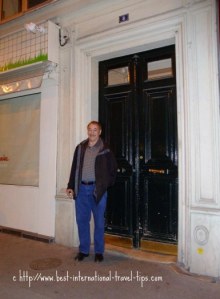 She arrived very quickly and gave us the number for the security door and told Al he could not smoke in the apartment. He assured her that he doesn’t even smoke inside at home ( which is true). She explained that everyone smokes outside in Paris now because of the new laws. It is the same in Canada.

We went in and she showed us how tho scan the key and then use it in the entrance door. Vicky made a comment about the elevator that worried me. She hoped that the elevator was working as it had not been earlier. Oh Oh, I needed that elevator! It was  the only reason that I could take an apartment on the 4 th floor. (five in Paris)  It was the smallest elevator  I had ever seen in my life, but it was working. I took the elevator with the two suitcases and Al and Vicky walked up the stairs. It held two people or one plus luggage it was such a hoot. It only malfunctioned once while we were going down one morning.

The apartment la Coupole was  just the way it looked on the internet no surprises at all. We were relieved. Vicky and I sat down at the table and I paid her the rent in half cash and half travel cheque’s and she wrote me a receipt in my small note-book.

She wrote down bus routes and I told her we were going to be mostly taking the metro. She said that most people find the metro challenging. I am used to subways in Toronto and Montreal so I thought I would be fine. She talked to us about things to do etc and when she saw my tickets and notes she said she had never seen anyone so prepared before. (that’s me)

She showed us how to use the washer dryer, t.v, and other things in the apartment. She explained not to fill the tub above the overflow as it does not work and floods the apartment below. We set up the key code for the internet on my computer so I was all set.

She took us out for a walking tour of the area. Told us what bakery not to patronize, showed us where she lived, and took us to the gate of the park. She asked if she should write down the code for the building but I had memorized it so she said, ” Oh, you will be o.k.” and we went back to our new home. 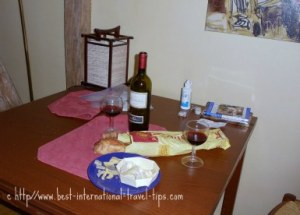 The second week we were there we were invited to have coffee with Vicky at her favorite coffee shop, cafe Vivan. We had been to Versailles the night before and we were so tired that we slept late and missed her. I was disappointed but maybe next time.

They provided  maid service once in the second week. 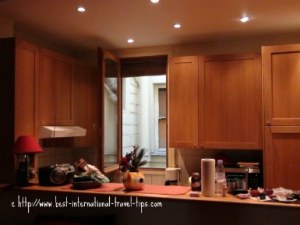 We felt very comfortable in our new apartment. It was everything that we wanted and more. Vicky was very nice and helpful and she anticipated everything that a person might need while staying there. It was very clean and nicely decorated. The kitchen was well equipped and the bed was comfortable. In Paris hotel rooms and apartments can be small but this one felt very spacious for the two of us. There were lots of guide, travel books and maps in the cupboard for reference.

The location was perfect with three different metro lines a few minutes walk away and all the shops and services right below us. 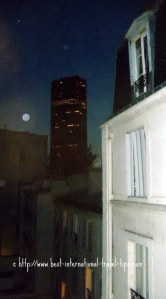 It was sunny in the daytime with lots of windows and we had a view of  Tour Montparnasse  out of the court-yard window.

We went down to the street and bought wine and cheese, a baguette and fruit and coffee for breakfast and made it our home for the next two weeks. 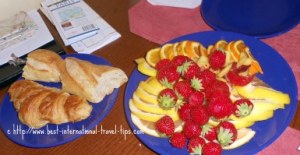 “We were snug as bugs in a rug.”~unknown

If you are ever thinking of a vacation rental in Paris France I highly recommend Vicky, Thierry and Parisbestlodge.  I definitely would rent from them again

I am an artist, that also loves to bake, cook, write, garden, decorate and take photos. I have dabbled in all kinds of crafts and business. My passion is travel; I travel and manage my websites. www.travel-tips-packing-luggage.com and nu-groovy.com "With direction in one hand and passion in the other, my hands are always full of possibilities." ~ unknown
View all posts by babyboomersmusings →
This entry was posted in France, on-line education, Paris, Travel, Travel tips and tagged France, Montparnasse, Paris, Parisbestlodge, Tour Montparnasse, vacation rental. Bookmark the permalink.