Vancouver bounced back quickly after riot

Posted on June 17, 2011 by babyboomersmusings 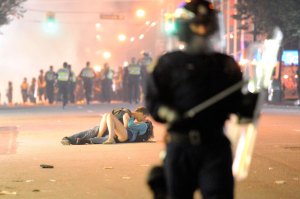 I mentioned yesterday on my face book, over a thousand Vancouver citizens were out the morning after the riot cleaning up the city. They were sweeping up glass and getting rid of the graffiti. Other than the boarded up store windows you would not know what had happened the night before. This is the real spirit of the people of Vancouver.

Today people are thanking the police and sending in video to help them catch the rioters.

There was a police car covered with notes of thank you today. Wow, what a difference that is not something we normally see.

It was understood that the police had to put all their effort into dispersing the crowd rather than protecting property because hot spots were scattered. Still they will have to come up with better plans before we have another event with so many people gathering in one area.

Something I noticed is that only 8 of the criminals rounded up were charged with anything so far. More will be arrested but will they come to justice? What about all the people aiding and abetting. Can we find the group of young men that started this and actually convict them and have them serve time? Maybe all the people standing around watching and taking video will redeem themselves for not helping by sending in their photos. There would be no point in arresting everyone involved. There are 1300 tips now but Canada has a reputation for not getting convictions.

Also is there anything we can do to get to the bottom of the real problem in our culture that breeds this anger and disregard for others amongst our young men. Yes, it was a small group that instigated this but why would so many people get such enjoyment out of joining in and destroying the property of others?

No, it wasn’t hockey fans that started it but why did some of these kids think it was a chance of a lifetime to be in the middle of a riot?

In the photo above the couple was identified as Scott Jones, from Perth, Australia,  comforting his girlfriend Alexander Thomas, after she was knocked down by police. She suffered a few bruises from the incident.

I am an artist, that also loves to bake, cook, write, garden, decorate and take photos. I have dabbled in all kinds of crafts and business. My passion is travel; I travel and manage my websites. www.travel-tips-packing-luggage.com and nu-groovy.com "With direction in one hand and passion in the other, my hands are always full of possibilities." ~ unknown
View all posts by babyboomersmusings →
This entry was posted in Travel, Vancouver and tagged Canada, Police car, Riot, Vancouver. Bookmark the permalink.